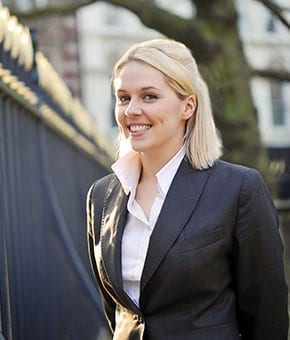 Lucie came to the law in 2006 after achieving her first degree in Classics from Cambridge University in 2005. At law school in London, Lucie was awarded a ‘distinction’ grade on her graduate diploma course and ‘very competent’ at BVC, scoring the top assessment mark in the area of Family law. During this time, Lucie was twice selected as a scholar of the Inner Temple.

Lucie undertook pupillage at St. Philips in October 2008, in the area of Public law children work under the tutelage of Alistair MacDonald (now QC). Since successfully taking tenancy, she has continued to practice solely in the area of family law and the law relating to vulnerable persons and diminished capacity.

Lucie appears for professional and lay clients alike. She understands the importance of achieving trust and professional rapport. Lucie is fierce in defending her clients’ position, combining a commitment to detailed knowledge of the case papers with an in-depth understanding of the law.

Lucie has a pre-dominantly court based practice, but is able to advise on papers as required particularly in the areas of Family Finance and ToLATA.

Lucie undertakes work in all areas of Family Finance. She appears regularly within Matrimonial Finance applications (formerly, Ancillary Relief) at both the originating stage (FDA, FDR and FH) and subsequent applications to vary.

Lucie very regularly receives instruction in the area of ToLATA, in respect of unmarried and same sex couples. She is able to advise both on application of the law and on procedural requirements. Lucie has taken cases through to Final Hearing on many issues, including orders for sale and distribution of proceeds. Lucie welcomes instruction in this area.

Lucie is familiar with the law in respect of financial applications for the benefit of children both under Schedule 1 Children Act and Reciprocal Enforcement of International Maintenance Orders (REMO). She has been instructed to advise and to appear at court in both of these areas.

Lucie is very regularly instructed in all areas of private law children work, including where there are allegations of domestic violence.

Lucie has appeared within s.8 applications for contact and residence at both conciliation and contested hearings within the FPC, County Court and High Courts. She takes care to keep up with the regular developments in this area of law, and has presented seminars on both Sturge and Glaser and Re W: promoting the absent parent.

Lucie has appeared at Finding of Fact hearings (up to four days) for clients both making and facing allegations of emotional, physical and sexual violence. Lucie is familiar with cross-examining lay parties in emotional circumstances, as well as challenging CAFCASS and other professionals where necessary.

Lucie receives instruction on ancillary applications under the Children Act, including prohibited steps and specific issue applications, particularly those relating to a change of known surname. Lucie has successfully made and opposed applications relating to relocation outside of the jurisdiction.

Lucie has recently been instructed in relation to an application to acquire parental responsibility for a same sex partner, where the conception of the child did not fall within the HFEA.

Lucie is very familiar with applications for injunctive relief under the Family Law Act 1996 and is happy to continue to receive instruction in this area.

Whether representing professional or lay clients, Lucie maintains a conscientious and methodical approach to these proceedings. She has particular experience in working with parents with learning and emotional difficulties and is always mindful of the importance of patience and sensitivity (as well as compliance with disability and equality regulation).

Lucie has appeared in hearings involving issues of general neglect, physical abuse and non-accidental injury, as well as allegations of sexual abuse by both family members and intervening third parties.

Lucie appeared pro bono on behalf of the Grandparents in a High Court case centring around allegations of chronic neglect resulting in the death of a sibling.

Lucie has also recently appeared as a junior in the Royal Courts of Justice on a Finding of Fact hearing over 15 days involving allegations of inter-familial sexual grooming over a number of generations.

Lucie has been involved in a number of cases with an international element; this has included involvement of foreign embassies in the decision to place a foreign national child for adoption within the jurisdiction of England and Wales. Lucie has represented the Local Authority seeking to place a child with a family member abroad under Sch.2 para.19.

Lucie keeps up with developments in this area of the law; she has given seminars on the Care Planning, Placement and Procedure Regulations and was part of the St. Philips team offering briefings to the profession on both the PLO and the President’s Guidance.

Lucie has spoken on the following topics:

"An admired junior." Chambers UK
"Well prepared and knows her cases inside and out. She delivers submissions with confidence." Chambers UK
Call us0121 246 7000