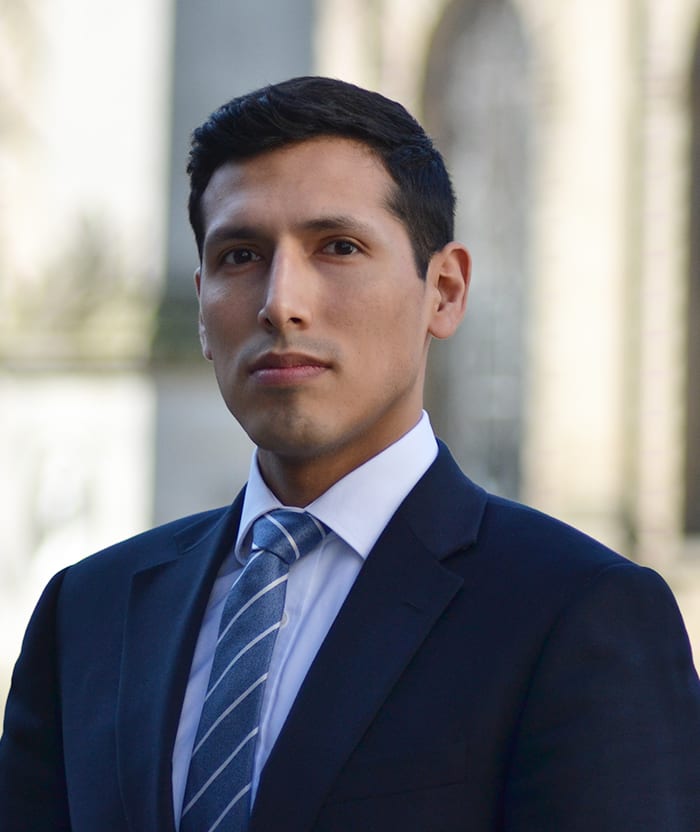 Joel’s style and approach sets him apart. Professional clients say that he has an ability to develop, deploy and fine-tune novel solutions, often borne of a deep review of the prevailing legislation, case law or rules of procedure. It is this ability to develop legal arguments that enables Joel to offer solutions in seemingly difficult circumstances.

Joel prides himself on delivering an exceptional and prompt client service, and focuses on navigating to the best client outcomes from the outset of his instruction. At university, Joel was a keen moot competitor and had considerable success: placing second in City Law School’s BPTC moot despite being a GDL student, and competing in the highly respected Telders Public International Law Moot for UCL. Outside of his thriving practice, Joel’s personal interests are diverse. Joel cooks Peruvian, speaks Norwegian and frequents Scotland. He undertakes volunteer work and, when time allows, enjoys playing five-a-side football.

Employment is a main area of work for Joel at present, closely tied by his growing commercial practice. Joel specialises in those areas of employment practice that lend themselves to not only fact management, but also where a deep understanding of the legislation, procedure and caselaw leads to tactical advantage. Accordingly, Joel is most often called upon in respect of discrimination, and whistleblowing cases, and has interests in TUPE claims and in contractual work.

Joel maintains a balanced Respondent and Claimant client portfolio and sees the benefits of regularly acting for both sides when it comes to case strategies. Able to comfortably deal with all types of Employment Tribunal hearing, drafting and advisory work, Joel receives instructions from local authorities, SMEs, franchises and franchisees, care providers, education providers, and national retailers. He has a growing appellate practice and recently successfully appealed a decision concerning the disallowance of ET1 amendments. A snapshot of Joel’s considerable employment experience includes:

Joel’s complementary commercial and contract law practice is varied. Joel has developed a niche in the Business Protection and Support space – in short, Joel specialises in business protection against present and future risks, whilst providing more general representation on the typical complexities and occurrences of modern UK business. Accordingly, Joel is comfortable in cases concerning bankruptcy, winding-up petitions, debt claims, insolvency as well as a more typical array of B2B and B2C commercial contractual disputes (finance, hire-purchase agreements, consumer rights, etc.). As you may rightly expect given his aligned employment specialism, Joel is also at ease when dealing with complex claims at the interface of contract, consultancy and employment, including restraint of trade, bonus payments, commission, TUPE, redundancy and issues concerning shareholder agreements upon termination.

Clients turn to Joel from a wide array of sectors. In recent years he has advised and acted for and against, professional football clubs, a sports regulator, a beauty and skincare company, a large social media company, business consultancy firms, care service providers, construction companies, and banks.

A snapshot of Joel’s considerable commercial and contractual experience includes:

A keen sportsman himself, Joel’s sports specialism cuts across all of his areas of his practice. He sits as an Adjudicator on the FA’s CFA Disciplinary Panel and is regularly instructed in both employment and commercial issues in the sector. Notably, Joel acted for a prominent academy footballer in that player’s efforts to leave their club, involving complex considerations concerning the interpretation of contracts and industry norms. He has also acted on various commercial claims for prominent football clubs, as well as novel disputes arising from the administration of a small-sided football league.

For Joel, delivering an excellent client service is essential. He prides himself on his prompt turnaround of instructions and a responsive style that ensures professional clients in particular are up-to-date and aware of where he stands with their case. Joel’s ability to digest and analyse, often vast, briefs and case bundles means that he is always across his brief and primed to present the best possible case for his clients. A natural presenter, gifted advocate and robust cross-examiner, Joel brings a rounded skill set to the table.

Ultimately, Joel also relies on hard work and significant investments of time and effort into each case. His outcome-focused mindset and approach means that he can navigate the issues quickly and liaise in a timely manner with his professional clients once papers arrive. Clients say that Joel’s self-deprecating and down-to-earth style makes collaborating on even the most challenging of cases easy and enjoyable.

"I really value Joel's hard-working and inclusive ethos. I know if I entrust a case to him, he will give it detailed consideration and will work with me to devise a strategy to deliver for the client. The client was impressed with his service and advocacy. A rising star and one to watch.” Surinder Dhillon (Senior Associate), Stone King LLP
“Joel quickly understood the matter despite its length and exceptional complexity, was extremely responsive to requests during the short deadlines and put the client at ease with his pragmatic, sensible and calm advice. I would not hesitate to recommend Joel – he is a powerhouse.” Toby Pochron (Managing Associate), Freeths LLP
“I've worked with Joel on a number of cases over the years, particularly with a large retail respondent. He's very knowledgeable, helpful, and approachable (something that you don't always find with counsel). I'm always confident that Joel has read papers in advance as he will call to run through particular lines of arguments for hearings or to confirm that everything is clear. He does not just present issues, but looks to discuss these with us to find a commercial solution for our client. He also makes himself available to answer any ad hoc queries on our cases which is an invaluable asset.” Leigh Jackson (Associate), Addleshaw Goddard LLP
“Joel immediately got to grips with the issues and with exceptional attention to detail, formulated a cogent skeleton argument and successfully represented my client at the EAT. Joel is calm and measured, adept at communicating with advocates and lay persons alike. He instilled confidence in my client and achieved a successful result in a finely balanced case and challenging circumstances.” Sarah Begley (Solicitor), The Wilkes Partnership LLP
Call us0121 246 7000