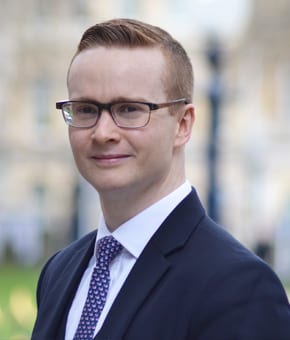 James is an advocate who regularly impresses at court. He is particularly able at building rapport with lay clients and witnesses, who respond well to his no-nonsense approach.

During his degree, James studied abroad at the University of Madison, Wisconsin. As well as studying at Law School, he interned on the 2008 Obama presidential campaign and trained with the US Army. His time with the US forces was a continuation of the two years spent with Sheffield University Officer Training Corps.

James has specialised in Criminal and Regulatory Law. He appears regularly in the Crown Courts across the country in the full spectrum of cases as well as before Coroners, Magistrates and Licensing Committees.

Clients often find James’ perspective useful to anticipate the consequences of a ruling in one court as to how it applies in another. He is also increasingly responsible for advising on all aspects of criminal litigation. This is particularly helpful in cases where lay and professional clients may be familiar with one type of court but find themselves in slightly unusual cases in another.

Having grown up in Lancashire and spent his university years in Sheffield, James is always happy to go back to his roots with work in the North of England.

James recently secured a conviction in a robbery charge where a hammer was used against a lone female to steal her car. The case involved DNA evidence and other circumstantial evidence to demonstrate the Defendant was involved.

James’ instruction in a County Lines drugs and human trafficking case has involved the review of a large amount of telephone evidence, from identification numbers to top ups and cell site. Having detailed knowledge of the evidential value a mobile phone can be used for has made the analysis of a very large body of evidence all the easier.

Having been a Disclosure Junior on two large and complicated cases for the CPS, his grasp of this difficult area remains current and first rate. The risk of injustice from failures in disclosure means that in all his cases – prosecuting and defending – James’ rigour makes sure only those cases proceed which are prosecuted in compliance with these important rules.

In cases of violence, James has obtained not guilty verdicts for clients where self-defence has been the issue. His ability to look carefully at CCTV – especially the time line – has made the difference in cases where the actions of someone else explained the victim’s injuries.

Getting a not guilty verdict in a case of causing serious injury by dangerous driving was a recent success. The Prosecution had tried to rely on phone evidence, vehicle damage and the passenger’s evidence to prove the dangerousness of the driving, but overemphasised the Defendant’s account. By focusing on the burden and standard of proof, James secured an acquittal of the driver.

James has extensive experience in successful applications for Exceptional Hardship. His most recent example includes a driver who had previously successfully argued to keep his licence and was barred from running the same arguments again. By focusing on a change in circumstances, he persuaded the Court to allow a further exception and kept the driver on the road.

His motoring experience extends to VOSA cases before the Traffic Commissioner where he has represented several professional drivers. Even before this specialist and often-difficult tribunal, James has persuaded the Commissioners to impose warnings or reduced penalties for his clients.

James accepts Direct Access instructions for motoring cases. This means a client can approach chambers to receive advice and representation from James without having to wait for a referral from a law firm.

James has extensive experience of proceedings under the Proceeds Of Crime Act 2002.

When defending, James raised an argument over the important concept of piercing the corporate veil. James acted for a Defendant who the prosecution asserted should be held responsible for his company’s assets. The company was a separate legal person and had not been prosecuted.

When prosecuting, demonstrating the Defendant had been involved in the street dealing of Class A drugs by examining the paraphernalia found by the police. This resulted in a higher benefit figure because the drugs were valued at a higher amount, which the Defendant himself eventually conceded.

James has also appeared for local authorities in cases involving businesses who tried to demonstrate their income was legitimate. Through careful cross-examination of expert forensic accountants, he was able to nullify the defence cases and obtain orders in the terms sought.

James regularly appears for NHS trusts, including Mental Health Trusts. Notably he represented the Queen Elizabeth Hospital during the inquest into the death of Kingsley Burrel. The inquest lasted several weeks, with James present to protect the interests of the hospital and care for their witnesses throughout the process.

Further afield, James spent a fortnight in Cardiff representing a Midlands local authority in a case involving the death of a looked-after child. The inquest was conducted with a jury, and James’ careful submissions ensured they remained focused on the central issues in the case that did not reflect on his client.

He has represented the family of the deceased in a case where a hospital forgot to remove a previous patient’s Do Not Resuscitate notice from the bed. The Coroner was persuaded by James to issue a report to prevent future deaths, a result the family were anxious to obtain so that someone else’s loved one may not be lost in the same way again.

James regularly advises as clerk to the Licensing Committees for alcohol licence reviews and applications. He has appeared for local authorities in many appeals to the Magistrates’ Court and Crown Court, and in High Court Judicial Review proceedings on behalf of the Respondent Local Authority.

With plenty of experience in taxi licence appeals across the Midlands, he fully appreciates the need to check local authorities’ published policies in addition to applying the fit and proper person test. This experience also informs his approach to cases where a licensed driver or premises is prosecuted for criminal offences.

James has also been involved in cases about Houses of Multiple Occupancy, both from a licensing and criminal perspective. He understands how onerous the requirements can be on landlords, but that some – particularly around fire safety – must be obeyed.

James has accrued extensive experience in trading standards cases, particularly around food safety. His practice extends beyond unhygienic premises to the traceability of food in the supply-chain, and fraud.

A notable example included him prosecuting a company in the Crown Court which had been changing the labels on frozen chicken to make it appear younger. This meant food which was only suitable for animal food was then sold into the human food chain. James went on to represent the local authority as Respondent in the Court of Appeal, where their lordships upheld the £50,000 fine imposed.

James is also involved in advising and prosecuting rogue trader offences, especially in the car industry.

James is a Band C prosecutor for the Executive. For several years he has also been involved in training new Inspectors and expert witnesses in giving evidence and presenting cases.

James is a Band C prosecutor for the Agency. He also has extensive experience in prosecuting fly-tipping offences for local authorities. In 2016 he successfully prosecuted the only case in the previous five years (as reported by The Times) of breaching a smoke control zone restriction.

James has built on his university experience of the military by accepting instructions to defend cases before the Court Martial. Amongst other cases, he represented the ring leader of a group of Marines who organised an initiation ceremony for new joiners to their unit. This case made the national news at the time.

James puts his background to good use by being able to understand military cases in their specific context that purely civilian representatives would struggle to comprehend.