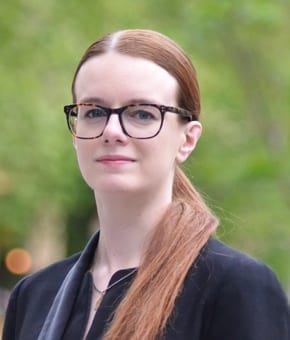 Catherine joined Chambers in April 2018, specialising in criminal and regulatory law. She has experience in a wide variety of matters including both Magistrates’ and Crown Court cases. She is listed on the CPS Advocate Panel for General Crime, level 1.

Catherine completed her pupillage under the supervision of Jennifer Josephs, whose work exposed her to a wide variety of complex criminal cases including homicide, gang crime and both historical and recent complaints of sexual offences.

Catherine accepts instructions on behalf of both Prosecution and Defence. She is regularly instructed to represent clients under Legal Aid or privately paid arrangements; but has also prosecuted on behalf of the CPS and the Probation Service. As well as the Crown Court and adult Magistrates Court, Catherine has a growing Youth Court practice.

In addition to her Criminal practice, Catherine acts in Regulatory and Licensing matters and has frequently prosecuted on behalf of local authorities. She has also acted as the legal advisor to the local authority during meetings of the Licensing Sub-Committee and has a developed understanding of the nuances of such decisions.

Catherine is a voluntary member of the BPP University Steering Group, using her experience of the course and her work at the Bar to advise on the design of the new BPTC course.

Prior to pupillage, Catherine gained commercial legal experience working with Cadent Gas advising on matters such as imbedding GDPR, freedom of information requests, internal disciplinary matters and public investigations. Applying this experience to her work, Catherine brings a deeper understanding of the application of law in a business environment, and the pressures sometimes inherent in striking this balance.

Prior to that she also wrote for the legal blog Inherently Human, which provides criminal perspectives on the relationship between law, gender and sexuality.

Catherine has a first-class degree from Durham University and is a member of Gray’s Inn. Away from work she is a keen dancer and violinist, having performed publicly at venues including the Arena Birmingham and Birmingham Symphony Hall.