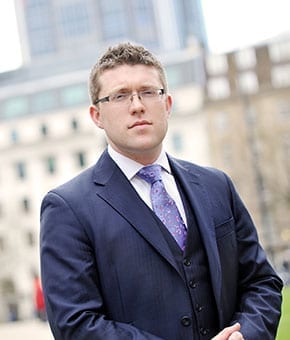 Ben is recommended in Chambers & Partners 2022:

He undertakes private client defence work for individuals and companies in a range of matters and his clerks are able to agree structured fees on a tailored basis.

He is ranked as a Level 4 CPS prosecutor, the highest grade, and is on the specialist CPS lists for Serious Crime, Rape, Fraud and Confiscation.

He is on the Attorney General’s List of Specialist Regulatory Advocates in Health and Safety and Environmental Law (Band B).

He is also experienced in Inquests and Judicial Review proceedings where they interface with criminal and regulatory issues.

Such cases necessarily involve a significant volume of evidence: covering eye-witness testimony, forensic science, ANPR and CCTV, cell-site mapping, phone contact analysis, and so on. Ben is consequently experienced in dealing with the particular technicalities of such material, and has developed transferable skills in managing voluminous and multi-faceted evidence.

Ben was defence junior for the defendant, described by police as an “iconic criminal” in Birmingham, in a high-profile series of murder trials arising from a double-shooting. The case involved no eye witnesses and depended entirely on technical evidence from CCTV/facial-mapping analysis, cell-site and call record analysis, and forensic science regarding firearms.

He was also defence junior in a case arising from a ‘drive-by’ shooting involving an automatic weapon (believed to have been a ‘Mach 10’) – again reliant on painstaking analysis of cell-site and phone analysis, cross-referenced to CCTV and ANPR evidence.

Numerous other murder cases include one in which the single defendant faced a plethora of forensic evidence (archaeology, pathology, anthropology, engineering, radiocarbon-dating etc.), cell-site, banking records, handwriting analysis, theology (paganism & ritual crimes), amongst other material, and which involved a 2-month trial.

Ben has acted as junior alone in various cases of attempted murder, including a trial against a QC involving a youth who had stabbed another youth to the neck.

Ben is experienced in representing Defendants on a private-fee basis in ‘white collar crime’ and is committed to providing the level of service which instruction on such a basis demands. He is currently acting privately in an alleged fraud concerning international meat importations and in ongoing litigation arising from complex alleged real estate fraud: the allegation being that residential properties owned by a major utility company had been sold off at an undervalue by an ‘inside man’ to co-conspirators.

He has defended as junior alone in a £2.5 million theft concerning car parts being taken from Jaguar Land Rover. The evidence included an in-depth audit trail of ordering records and analysis of financial evidence.

Ben has defended in cases including a Building Society employee allegedly abusing her position to defraud vulnerable customers of savings; online credit card fraud; a company director’s lavish abuse of a company credit card; an accountant siphoning money into a personal account using false invoices, and a school administrator ‘skimming’ payments made by parents.

He has acted as junior Crown counsel in the prosecution of a string of conspiracies to defraud car insurance companies, and   a complex immigrationfraud.

Additionally, Ben has been instructed by financial institutions including Barclays Bank to represent their interests in disclosure processes within prosecutions of fraud, protecting confidentiality of employee identity and other data.

Ben is on the CPS Specialist Panel for proceeds of crime work. He has acted in a number of applications under POCA and preceding legislation, arising from prosecutions for drug, fraud, and trading standards offences in particular, for Restraint, Confiscation, and Enforcement orders. He has appeared in numerous cash forfeiture cases, including an application for forfeiture of c.£1/2 million in cash based on allegations of leasing and tax fraud, and another for c.£300,000 derived from money-laundering. He has represented the CPS as intervener in ancillary relief proceedings in the High Court (clash between confiscation under the DTA and the Matrimonial Causes Act). He is frequently specifically instructed to undertake the confiscation stage of cases,post-conviction.

Recent defence experience includes: a series of rapes and sexual assaults by a man in 3 unrelated incidents in the same day, including dragging a 14-year old girl into woodland; an alleged rape of a 15-year-old girl by a man with a conviction for unlawful sexual activity with a minor, following grooming behaviour; alleged rape by a man of good character of his partner on multiple occasions; historic sexual abuse of relatives by a man now in his 80’s.

He was led by Stephen Linehan QC in the defence of a man in his mid-90s facing sexual allegations dating back to the 1930s, concerning his natural daughters as well as pupils of both sexes who attended a school for maladjusted children which he ran as proprietor and headmaster. The Defendant had been prosecuted, and acquitted, several times in the 1970s & 80s, giving  rise to disclosure issues and abuse arguments. The Defendant was also, given his age, beset by a range of mental andphysical frailties, giving rise to separate abusearguments.

Ben was privately-instructed junior defence counsel in a major prosecution by the Environment Agency concerning a series of major fires at the largest covered recycling plant in Europe. He has acted in many private prosecutions brought by statutory water undertakers Severn Trent Water and United Utilities, for offences committed by businesses in relation to the sewerage network. He has acted for Local Authorities on many occasions, including prosecuting a metalworking company for breaches of a Noise Abatement notice, involving complex scientific evidence on noise attenuation and wide-ranging legal argument.

Ben prosecutes for the national Illegal Money-Lending Team (re ‘loan sharks’). He has acted in numerous cases concerning counterfeit goods, Trade Description offences, Electrical Safety and Food Hygiene. He has experience prosecuting and defending in cases brought by the Department of Business concerning disqualified company directors.

Ben acted as junior counsel defending a theme park in relation to a high-profile ride fatality involving a child.  He has been involved in a range of cases arising from alleged breaches of Health & Safety regulations, acting for both companies and individuals in the Crown Court, Coroner’s Court and in the context of civil litigation. Examples include a near-fatal roller door collapse; a fatal fall from height; electrocution at work; and fatal crushing at a haulage company’s yard.

Ben has defended private clients (corporate and individual) in Fire, Food and Health & Safety cases, including the owner of a chain of pubs; a private landlord with a portfolio of HMOs; and a national business owning a string of Burger King franchises.

Ben has a wealth of experience in respect of liquor, taxi, gaming, and late night refreshment licences appearing at committee stage, in the Magistrates’ Court and in the Crown Court.

Ben is currently instructed as junior counsel defending a theme park in relation to a high-profile ride fatality involving a child. Ben has appeared at Inquests to represent the interests of Local Authorities, companies, and individuals in the context of workplace fatalities (falls from height; crushing accidents, etc.) and in respect of a resident who escaped from dementia care home and was hit by a train. The latter case received extensive media attention.