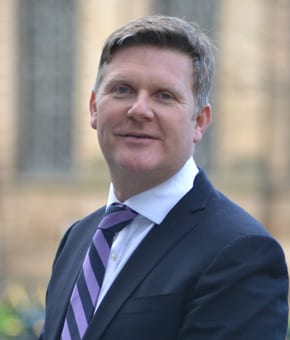 Lee was appointed Queen’s Counsel on 15th March 2021. He is regularly instructed to appear for both the prosecution and the defence in cases of murder, rape, sexual assault, making indecent images, conspiracy to import drugs, armed robbery, firearms offences and blackmail. He is often instructed privately by individuals as well as being instructed by unions; such as The National Farmers’ Union and Community (a prison officers’ union), as well as insurers, such as Direct Line.

At the time of his appointment Lee was a Grade 4 prosecutor and upon the lists of approved advocates that are able to prosecute rape, serious sexual offences and serious crime. His experience also includes large scale fraud and people trafficking. He is instructed in many cases of indecency where the alleged victims are children. Lee has often led other barristers and has a strong sense of working at the forefront of a team.

Having represented local authorities in Trading Standards cases Lee has also lectured Trading Standards Officers upon aspects of their investigative work. Lee is also upon the Health and Safety list and is regularly instructed to appear at inquests.

Over the last ten years Lee has appeared in a number of inquests representing families and other interested parties. He has dealt with a wide range of evidence involving complicated expert evidence for the purposes of reconstruction. After the hearing one family expressed their satisfaction that the proceedings had enabled them ‘to do right’ by the deceased and said of Lee this feeling was ‘was all down to you and the effort you put in. We will always count ourselves fortunate to have had you on our side’

Foot Anstey solicitors ‘I now know who to use for another inquest.’

Lee represented the Care Quality Commission, an interested party, in an inquest which concerned the death of a young man who exsanguinated during dialysis whilst in hospital. The accident occurred when the venous alarm upon the dialysis machine was reset at a time when the operator did not check/ notice that the venous line had become disconnected.

Lee represented an interested party who had been the subject of a criminal investigation.

The inquest centred about the death of a schoolgirl following neglect by her Aunt. The client was extensively questioned by the coroner upon the issue of whether she and/or others had perverted the course of justice by covering up errors and/ or omissions in relevant school records.

Lee was asked to represent the family of the deceased following his death at work in circumstances that led to two of his colleagues being interviewed upon suspicion of manslaughter. The deceased was a linesman replacing overhead wires on a hillside in woodland at night. His pole, which was rotten below ground, had fallen as a result of a shock loaded tension imbalance when wires between it and an adjoining pole were cut. The first of the two colleagues interviewed by the police had cut the wires that caused the tension imbalance. His account, supported by others present, was that the deceased had told him to cut them. This was an assertion that the family did not accept given the obvious danger of giving such an order. The second of the two colleagues was asserted by a sub-contractor to have deliberately decided not to replace the rotten pole when the work was initially planned. That accusation was denied by that colleague.

In front of a jury Lee fully examined the issue of whether there had been a ‘cover up’. In addition he robustly questioned the working methods of the company, Western Power Distribution, that were and should have been employed. The coroner accepted, following contested legal argument, that these inquiries were concerned with the last link in the chain of causation and were not outside the scope of the inquest. The hearing took eight days and seven counsel attended to represent the various interested parties. Lee, who is a grade 4 prosecutor, was able to draw upon his experience in the criminal courts when questioning the witnesses as to what had actually occurred before the police took statements for the purposes of the criminal investigation.

Lee appeared at an inquest into the death of a couple who burned to death after their car caught fire following a road traffic accident. The collision occurred when the driver of the deceased’s car exited a junction because he did not see a ‘Give Way’ sign hidden by foliage. The deceased was driving his grandchildren home and the children witnessed both his death and the death of his wife. Lee represented the driver of the vehicle that collided with the deceased’s car. He asked questions of witnesses from both the highway maintenance company and the car manufacturer whose work was under scrutiny. The hearing took place amidst scenes of acute acrimony between the parties that led to arrests being made at court. Members of the deceased’s family clearly blamed Lee’s client for the tragedy when on any view the client himself was traumatised by what had happened and had done his best to avoid the accident. At the conclusion of the hearing Lee’s client thanked him for his support and for ‘standing firm’ in what was a highly emotive arena.

The deceased fell from a low level first floor window in a hotel that had been built in the eighteenth century. Whilst a verdict of accidental death was virtually inevitable the case raised issues about when restrictors and safety bars should be fitted to windows in public premises. Lee met with the family in advance of the hearing and discussed the questions that they wanted asking, the possible causes of the fall as well as alleged lies told by witnesses during the course of the investigation. Afterwards he was thanked by the family for questioning the hotel owner in a precise and forthright way. They also remarked that Lee ‘did a fine job in representing me and my family on the day’.

Lee has represented many local authorities, individuals and companies in a wide range of cases and a number of high profile cases. He has developed a reputation for clear thinking and a methodical and analytical approach to expert evidence. He quickly acquires an understanding of working systems and production processes. He has an ability to grip the issue and focus upon the reality of working directives in practice. He appeared as prosecution junior counsel in a two week trial of Superdrug plc. The case concerned allegations that the company was selling dangerous sun care products which were labelled ‘Happy Faces Baby Faces.’ The company was alleged to be acquiring and selling products from the United States which did not contain the requisite sun protection factor (S.P.F.) in the United Kingdom. The case required an understanding of the differences in the composition of sunlight in different geographical locations. Expert evidence was called by the leading scientists in Europe and the United States. In addition the court heard from Dr Young, the world’s leading expert upon the link between over exposure to sunlight at a young age and cancer.

In addition Lee has prosecuted other multinational companies such as Lidl for selling food products which were misdescribed in terms of the quantity of water within the product and its origin.

In 2015 Lee also defended a four week case concerned with the systematic alteration of readings shown on odometers of over 100 cars which were acquired by car traders and sold with false particulars. The prosecution by Birmingham City Council was the biggest of its type, in terms of the number and value of the vehicles with which it was concerned.

Lee has also defended cases concerning the manufacture of children’s clothing and the adequacy or otherwise of fire retardant upon children’s toys.

Lee also has experience in cases of fraudulent trading and mortgage fraud. He has defended company directors for prosecutions undertaken by The Official Receivers Office in respect of the Insolvency Act 1986. He has been instructed in multi-handed cases where the sums have regularly run into millions of pounds.

Lee has prosecuted and defended a large number of cases in this area. He has defended a Go-Kart company prosecuted as a result of an accident resulting from oil that hadn’t been cleaned from a tarmac track and a jewellery business following an employee bypassing safety guards and being pulled into a lathe. In addition he also prosecuted Tesco plc following a lady breaking her leg after she slipped upon yoghurt that had gotten onto the floor in the public area of one of the company’s supermarkets.

Lee has experience of both prosecuting and defending in these cases. He has a particular interest in the unlawful disposal of waste and consequential proceedings for confiscation as a result of the benefit accrued from avoiding the levies that would have been imposed had the waste been disposed of lawfully.

Lee prosecuted the biggest prosecution, in terms of animal welfare, ever conducted by Worcester City Council (Worcester CC v Tongue). The three defendants were prosecuted in four separate trials in the Magistrates’ Court and the conjoined appeals were heard over a period of six weeks at Hereford Crown Court.

The three men, who were keepers of livestock, sold an area of land at a sizeable profit. They then acquired further farms with that money and housed upon them herds of cows and bulls. However, none of the animals was given adequate feed, there were no dry lieing areas and too many bulls were put in the same fields as the cows.

Following a spot check by inspectors many of the animals were found to be so emaciated that their bodies were catabolizing their internal organs. Very many of them were also badly injured from being gored because the bulls, which were not de-horned, had fought for the attention of the females. In addition some animals were ill and were suffering from infection. None of the animals was also saleable as they all lacked identifying tags and papers capable of verifying their origin. During the course of their offending some of the animals were shot by the men when vets from the department for the environment and rural affairs attended. Having been convicted in the first three trials the men continued to keep animals although disqualified from doing so and they were then imprisoned. They then lost the appeal and were made to pay a significant amount of costs.

Lee has also been instructed to defend  a member of the National Farmers’ Union accused of neglecting his animals, failing to feed them properly and failing to seek prompt veterinary assistance.

Lee has ten years’ experience in defending and prosecuting a range of regulatory cases, including trading standards, health and safety and animal welfare.  He has worked on cases involving the production and selling of counterfeit clothing, the adequacy of fire retardant treatment on fabrics, false descriptions in particulars provided by estate agents and the accuracy of descriptions upon labels relating to food products.  Cases have involved multinational companies such as Lidl and Superdrug; Department for Environment, Food and Rural Affairs (DEFRA); The Official Receivers Office; Birmingham, Worcester, Warwickshire and Coventry local authorities and the RSPCA.

The principal charges have been brought under the following acts: