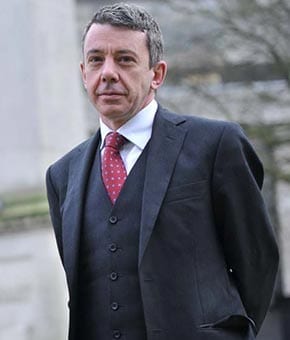 Dominic has a broad based practice in commercial law and advises on both contentious and transactional matters. He is regularly instructed by the legal departments of major corporates and by accountancy firms to advise on specific issues arising on corporate and other transactions. He has significant experience in resolving claims arising out of complex contractual documentation. Dominic also advises on professional negligence claims, in particular those relating to company or financial matters. Dominic was previously an equity partner at a leading national law firm where he was both a litigation and corporate partner.

Dominic advises on all aspects of company law, directors’ duties, corporate governance and statutory compliance. He has advised on and acted in disputes on shareholders’ agreements and articles of association as well as advising on unfair prejudice proceedings and on class consent and statutory squeeze-outs. He regularly advises major corporates and accountants on legal issues relating to dividends, other income and capital distributions and the presentation and preparation of financial accounts. His work includes advice on reductions of capital on both court-confirmed and solvency statement schemes; book and fair values in relation to non-cash distributions; net asset tests; establishment of merger and group reconstruction reserves; and the recognition of group assets at fair value via intra-group reconstructions. His practice also includes advice on the legal classification of equity and debt instruments for financial reporting and other purposes and on equity structures including the utilisation of B and C share schemes and the use of cash-box structures. Dominic was awarded The Financial Times Innovative Lawyers’ Award in relation to his work on the concept of a contractual profit reserve. He also advises on general corporate transactions including acquisition agreements and takeover schemes as well as group reconstructions, re-organisations and simplifications. Dominic also has significant experience of director disqualification proceedings and in carrying out internal investigations for major corporates as well as acting for companies in relation to statutory investigations initiated by the Secretary of State. Dominic was previously an equity partner at a leading national law firm.

Dominic has also advised on the takeovers of a number of well-known companies including James Beattie and Interflora.