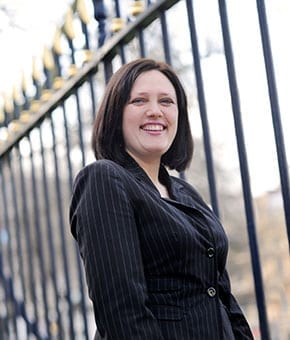 Since starting her career at St Philips in 2000, Jennifer has established a busy practice as a popular and effective leading junior. She specializes in criminal law, appearing predominantly in the most serious and often high profile cases. She been appointed to the Prosecution approved list for offences of counter terrorism, serious and organized crime, rape and fraud as a grade 4 advocate, the highest level.

She acts on behalf of the Prosecution and the Defence, being regularly instructed in cases involving multiple Defendants and complex conspiracies. She has particular experience of defending clients who are especially vulnerable, often through age or mental illness. She has a friendly and pragmatic approach, which wins the confidence of both lay and professional clients on both sides.  Notable cases have involved murder, firearms conspiracies, organized crime, money laundering and drug importation.

Jennifer is regularly invited to train local students, as well as being an approved advocacy trainer for the Midlands Circuit.

Jennifer has extensive experience of murder cases from gangland shootings to baby shaking allegations. Frequently junior of choice for silks both in chambers and elsewhere on circuit, as well as being instructed by herself.

Jennifer has been appointed to both prosecution panels as a grade 4 advocate. She is instructed to prosecute multi-defendant cases of the highest level including drug importation, firearms, money laundering, organized violence and terrorism.  She has a great ability to assimilate large and often complex evidence and translate it into a sensible and understandable form for the jury.

Her knowledge and experience as a leading prosecutor in this field has made her barrister of choice for a number of defence firms.

Jennifer regularly represents both prosecution and defence in this involved and challenging area of law. She is a vulnerable witness handling advocacy facilitator She has particular experience in representing young and vulnerable Defendants, often in inter-familial allegations.
She also has regularly appeared in cases involving the downloading of illicit material. She has a good understanding and knowledge of dealing with allegations of sexual offending over the internet , something that is very much on the increase these days. She has been instructed in cases of large scale sexual offending by gangs as well as individual offending involving severe breach of trust.

Jennifer was appointed to the fraud panel at level 4. Her attention to detail and commitment are essential in this complex area of law. She prosecutes and defends at all levels, dealing with clients from all walks of life on both private and publically funded cases.

Jennifer generally represents private clients in the Magistrates and Crown Court, as well as of course regular publicly funded work. She has particular experience in dealing with expert evidence, including accident reconstruction, especially in in cases involving fatalities.

As part of her regular work in the organised crime arena of drug trafficking and money laundering, Jennifer has developed an enhanced understanding of and experience with POCA applications. This is something that Defence teams find attractive, when looking for expert advice. She has dealt with cases at all levels, from prosecuting million pound fully contested cases, involving hidden assets, through to representing individual clients who have little or no assets at all.

As this area of law continues to grow clients can be assured of a confident pair of hands in arguing and resolving these applications.